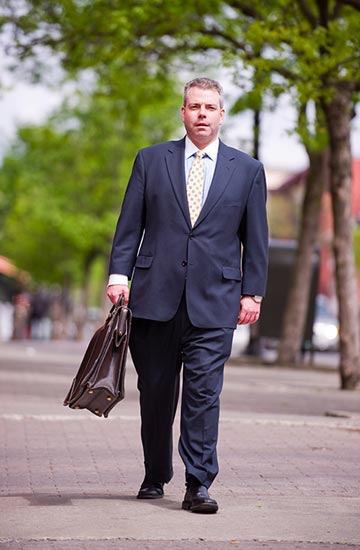 Robert, a partner with KAPLAN AND KAPLAN, began his legal career after graduating cum laude from Albany Law School of Union University in 1992.  Robert has dedicated the majority of his legal career to personal injury and business litigation cases.  It is the litigation side of the law that most inspires and challenges him in his work.  The litigation process is one of determining an intended outcome and working backward to achieve that goal.  Robert has the expertise and know-how to move you through the myriad decisions and steps necessary to resolve any situation in a reasonable manner.  By his clients, he is regarded as “compassionate; managing his cases skillfully never losing sight of the end result and the human being behind the litigation.”

Robert has worked extensively with people from all walks of life with situations that vary from DUI, personal injury, workers compensation, harassment, and reckless endangerment.  Regardless of the size of the case or scope of the problem, Robert devotes himself to a just and realistic end result.  His assessment of your case will reflect a caring, level-headed, and analytical approach.  This approach is mirrored by the partners and staff alike to best support you through the entire process expeditiously and with respect.

Away from the office, Robert is the proud parent of three children.  The dedication Robert devotes to his own family is reflected in his work at KAPLAN AND KAPLAN.  As a client of KAPLAN AND KAPLAN, your concerns will not only be handled with the kind of professionalism and capability that is built by decades of experience, but you will also be part of the family.